First time in Ukraine on December 3rd, 2015, with the participation of Allan Stewart, the leading cardiac surgeon of Mount Sinai Hospital (New-York, USA), two unique surgical procedures for have been performed to cure two Ukrainian patients with ascending aorta aneurisms. 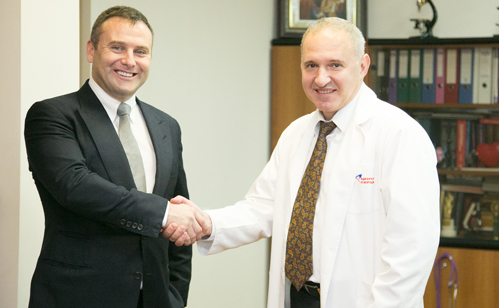 Leading cardiac surgeons – Allan Stewart and Boris Todurov
The surgical procedure to cure ascending aorta aneurism, so called David operation, is considered an indicator of supreme proficiency of a cardiac surgeon. This is one of the most complicated and high technology-rich procedures in adult cardiac surgery.

The aneurism of ascending aorta is a severe disease, which can cause aortic dissection and rupture, so critical conditions and even death can appear. In case of routine cardiac operations for aortic aneurism the aortic valve is replaced with prosthesis. In David procedure the natural aortic valve is preserved and implanted into a prosthesis of aorta, which doesn’t necessitate lifelong use of anticoagulant drugs, and so – lets the patient preserve active lifestyle, and lets women have children. That is why such procedures are extremely important for young patients. 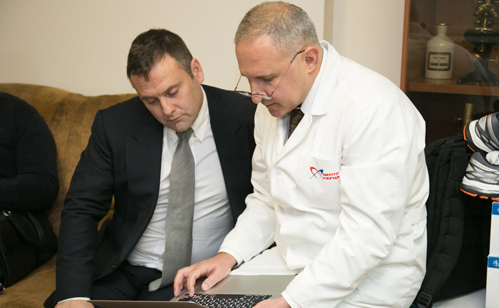 In order to perform these operations, Prof. Allan Stewart brought two free prostheses for Ukrainian patients.
Doctor Stewart said, that both operations were successful, all the indicators of the patients’ critical functions are normal. «The first patient had a bicuspid aortic valve and Marfan syndrome, that made the procedure more complicated, it went about three hours. However, it was brilliant teamwork, like a ballet, when the surgeons understood one another without any word, just by hand language» – said Professor Stewart after the operation. 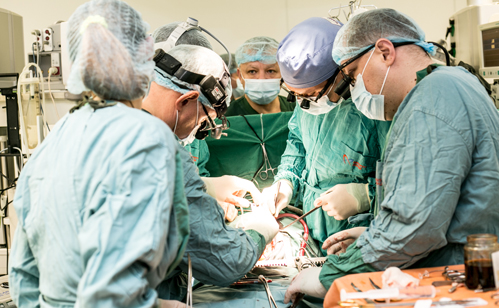 «I dreamt about such an operation being done in our Institution, and eventually it became a reality – commented the General Director of SI Heart Institute by the Ministry of Health of Ukraine Boris Todurov. – The main task, to treat our surgeons this technique, is done, but for complete proficiency of our specialists in this procedure we have to do 2-3 more joint operations with Professor Stewart. We just agreed this».