Ultrafiltration is supposed to remove excess fluid from the body using special devices in patients who have significant fluid retention, despite the maximum doses of standard diuretics. In general, ultrafiltration is similar to glomerular filtration, a specific function of the kidneys, and is the main form of renal replacement therapy used to remove fluid with minimal solute clearance.

This method was first used to treat severe pulmonary edema in the 1950s, which later led to the development of a modified dialysis сircuit in the 1970s.

Although modified methods of continuous renal replacement therapy and conventional hemodialysis systems can be used to treat fluid overload, newer methods use isolated ultrafiltration systems. These insulated systems consist of a compact portable machine; a disposable filter; and a specialized сircuit of vascular access tubes and catheters.

What is necessary for the procedure? 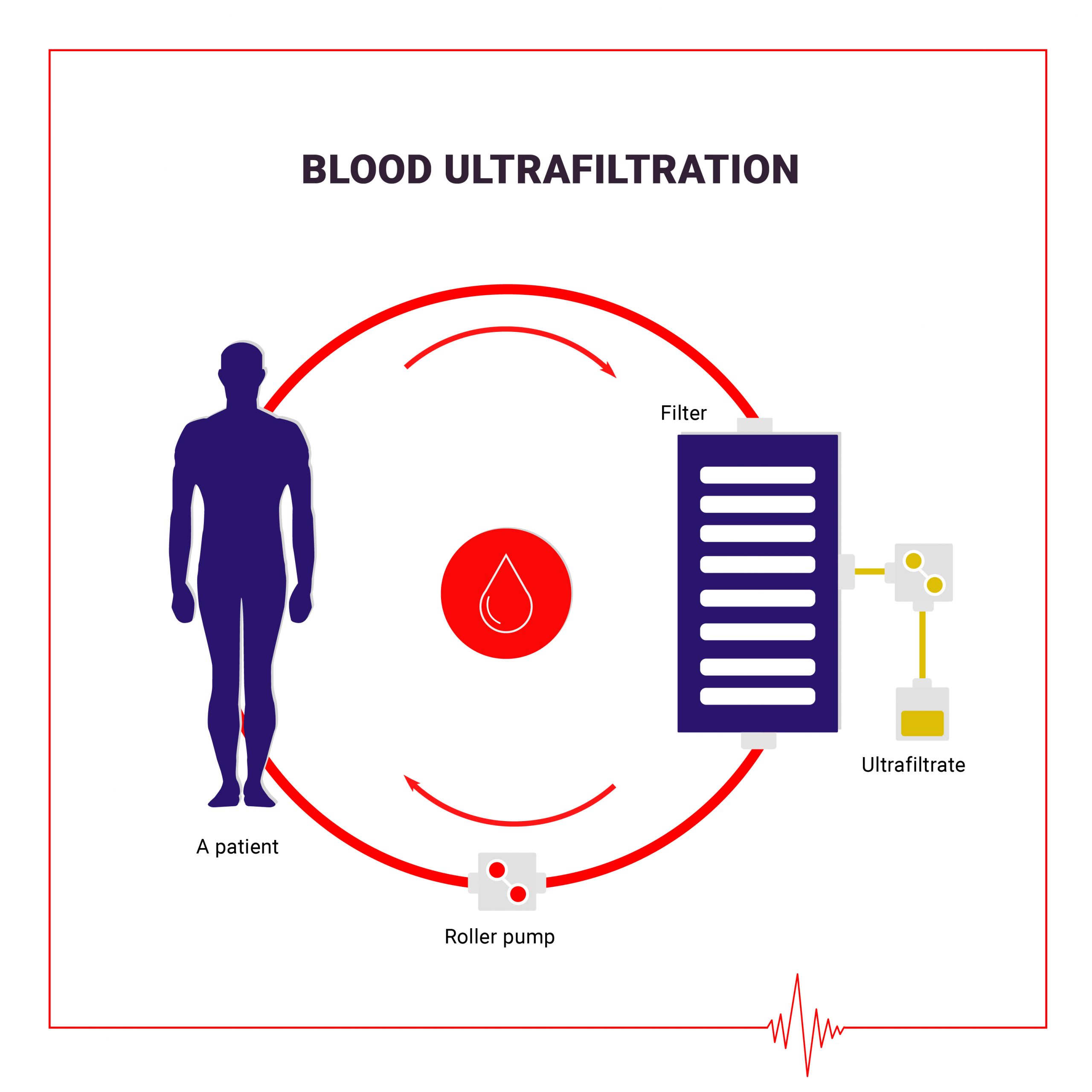 The filter is made of highly permeable membranes that allow separating water and low-molecular-weight (<50,000 Daltons) solutes from the blood. Excess fluid and molecules are sent to the collection bag, and fluid, blood cells, proteins, and other larger molecules that cannot pass through the membrane are returned to the patient. Since the specialized circuit does not produce any forces or pressures other than the transmembrane pressure gradient, sodium can pass freely through the fibrous membrane, allowing equalizing concentrations on each side. The concentration of sodium in the liquid deposited in the collection bag remains isotonic with respect to the blood returned to the patient.

Thus, the resulting ultrafiltrate has the same composition as blood plasma water (without proteins and shaped blood elements) and, in fact, is isoosmotic with blood. At the same time, oncotic pressure increases in the blood, which leads to the movement of fluid from the extravascular to the intravascular Department. Due to this movement, the development of systemic hypotension during the procedure is prevented.

How long does the procedure last?

Based on the patient’s condition, the doctor decides how quickly and how much fluid should be removed, and the procedure is performed continuously (day and night) until the specified amount of fluid is removed (or up to 72 hours). The overall effect of ultrafiltration is to quickly and safely remove large volumes of liquid in a short period of time. Removing excess fluid will not only improve the overall condition of patients with heart failure, but also improve their quality of life.

The ultrafiltration machine is programmed to remove the exact amount of excess fluid at the exact rate determined by the doctor. The liquid is removed at a maximum volume of 500 ml / hour for a period that usually varies from 8 to 24 hours. All parameters are determined by carefully evaluating the patient’s clinical condition and overall therapy goals.

How do patients feel during the procedure?

Do patients continue to take their usual medications during the procedure?

In general, during the procedure, doctors decide which medications to take, but patients are given diuretics. Their administration begins again after the procedure is completed, often with a lower dose. Patients who use insulin or inhalers should have them with them for the duration of the procedure.

Initiation of ultrafiltration requires setting up vascular access, which is usually inserted by placing a special double-lumen dialysis catheter in the internal jugular, femoral, or subclavian vein. In adults, the design and position of the catheter should be sufficient to maintain a blood flow rate of 200 to 300 mL / min. Cannulation of the right internal jugular vein is usually better than that of the left, given the more direct passage from the right side to the right atrium. Subclavian cannulation is usually performed less frequently due to the higher risk of complications and the risk of subsequent venous stenosis. In general, KDIGO’s clinical guidelines for acute kidney injury recommend using the right internal jugular vein as the best location for catheterization.

What are the advantages of ultrafiltration?

What are the limitations of ultrafiltration?