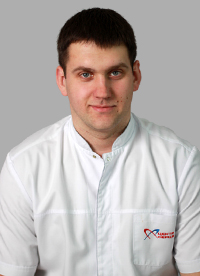 Since 2016          Assistant of the Department of Cardiac Surgery, X-ray endovascular and extracorporeal technologies of NMAPE named after P.L. Shupyk

2018      Workshop and clinical training on the implantation of mechanical circulatory support VAD (How to structure, create and run HeartWare HVAD “Medtronic”), Leiden, The Netherlands

2010 – present   ECMO Program Coordinator at the Heart Institute of the Ministry of Health of Ukraine. Responsibilities include responsibility for supervising and training technical staff, maintaining equipment, and collecting patient data.

2010 – present   Anesthesiologist, Department of Extracorporeal Treatments, Heart Institute. Provision of cardiac surgery with artificial circulation in adults and children, as well as all types of extracorporeal life support (ECMO) and mechanical means of circulatory support VAD in patients with end-stage respiratory and heart failure. One of the areas is the treatment of various disorders of lipid metabolism using extracorporeal technologies (cascade plasma filtration, etc.) and other methods of hemocorrection (ultrafiltration, hemodialysis, hemodiafiltration, plasmapheresis, plasma exchange, hemosorption, plasma sorption, etc.).

2015 – present   Assistant of the Department of Cardiac Surgery, X-ray endovascular and extracorporeal technologies of the NMAPE named after P.L. Shupika. Providing the educational process, cycles of thematic improvement and specialization in cardiac surgery, practical and theoretical training of students and cadets, daily organizational work at the department, responsible for the medical work of the department. He defended his dissertation (Doctor of Philosophy) in the specialty “Anesthesiology and Intensive Care” on “The effect of depth of anesthesia and perfusion regimens on the cognitive function of patients with coronary heart disease, operated in an artificial circulation”

Participates in clinical trials of drugs. He has an international GCP certificate.

2016     An active member of the Ukrainian Association of cardiothoracic, endovascular surgery and transplantology

2018      Active member of the Ukrainian Association of Anesthesiologists, perfusionists and intensive care specialists